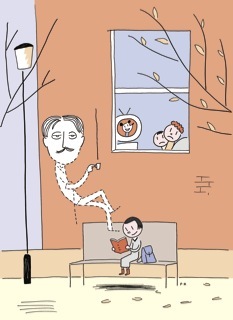 Caleb Crain in The New Yorker writes on recent studies that demonstrate a marked decline in reading among the American public… as usual, television gets much of the blame, but Crain makes some interesting points, drawing on Maryanne Wolf’s recent book Proust and the Squid (great title!) which examines the neurobiology and cultural evolution of reading, and a host of other researchers on literacy along the way:

The scholar Walter J. Ong once speculated that television and similar media are taking us into an era of “secondary orality,” akin to the primary orality that existed before the emergence of text… But there is research suggesting that secondary orality and literacy don’t mix. In a study published this year, experimenters varied the way that people took in a PowerPoint presentation about the country of Mali. Those who were allowed to read silently were more likely to agree with the statement “The presentation was interesting,” and those who read along with an audiovisual commentary were more likely to agree with the statement “I did not learn anything from this presentation.” The silent readers remembered more, too, a finding in line with a series of British studies in which people who read transcripts of television newscasts, political programs, advertisements, and science shows recalled more information than those who had watched the shows themselves.

Cain gives plenty of cause for worry if the decline in public reading continues:

… the N.E.A. reports that readers are more likely than non-readers to play sports, exercise, visit art museums, attend theatre, paint, go to music events, take photographs, and volunteer. Proficient readers are also more likely to vote. Perhaps readers venture so readily outside because what they experience in solitude gives them confidence. Perhaps reading is a prototype of independence. No matter how much one worships an author, Proust wrote, “all he can do is give us desires.” Reading somehow gives us the boldness to act on them. Such a habit might be quite dangerous for a democracy to lose.  (read the rest of the article)