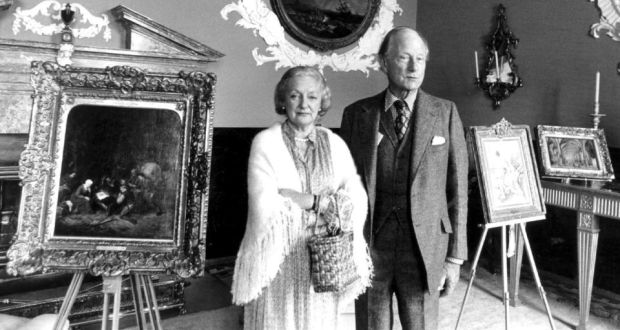 Benfactors: Sir Alfred and Lady Beit at Russborough House in 1978 with Adoration of the Shepherds, by Adriaen van Ostade, one of paintings destined for Christie’s. Photograph: Dermot O’Shea (photo & link from the Irish Times, 13 June 2015)

Thanks to everyone who has circulated notice of the Beit paintings campaign, signed the Irish Arts Review petition, or otherwise made their voices heard on this issue! It was heartening over the weekend to see such great coverage in the Irish Times, and also on RTE Drivetime which featured our Professor Kathleen James-Chakraborty summarising the controversy, and explaining why it matters (listen back here)!

One of the extras accompanying Rosita Boland’s excellent piece in the Irish Times (‘Flight of the Beits’ – read it here) was a sound clip provided by my colleague Dr Philip Cottrell, working along with School alum Ciaran Woods, which was extracted from a 1985 BBC documentary where the Beits explain their intentions leaving the house and collections jointly in trust — and their clear wish that the collection remain intact. That recording (and its transcript) are linked to / provided below.

Please join us on Wednesday for a public event in Tailors’ Hall where members of our School, the Irish Georgian Society and An Taisce will be discussing the significance of these paintings and the campaign to save them.

An extract of an interview (2:36) conducted with Sir Alfred Beit and Lady Beit in 1985 for a BBC documentary in which they discuss the importance of keeping Russborough and its collections intact (transcript follows below)

It was broadcast on 7 July 1985 – almost 30 years to the day before the bulk of this priceless group of old masters are due to be sold off at Christie’s London (some of which, including the Rubens, Study of a Bearded Man, are discussed at length in the documentary). The documentary was part of a series, The Great Collectors, presented by Harriet Crawley.

Presenter: From April to October, Russborough is open to the public. Clementine and Alfred Beit have no children, and they were faced with the problem: how to keep the house and the collection together?

Lady Beit: Although there are some wonderful institutions and societies in this country to do with the arts, there is nobody – no ‘body’ – which functions in the same way as the National Trust. And therefore we began to worry about the future and we felt that whatever we did about this, to whomever we left it, or what have you, that the day would come when they couldn’t possibly afford to live in it, and what happens? In this country everybody is very keen to buy land but virtually nobody wants to live, love and care for a very, very large house. And we became worried about this.

It’s not only a question of the house it was the fact that we had spent, on the whole I suppose you could say, about the last 30 years putting the collection into the house – the two made a very happy marriage and we didn’t want to disturb it, and we were nervous that something in the future might happen whereby the house would be sold, people would lap up the land, the house would go to rack and ruin, and the collection would be dispersed.

Presenter: For this reason, in 1978 a trust was set up, the Alfred Beit Foundation which today administers Russborough…

Lady Beit: …quite frankly, to buy anything up to the standard of the rest of this very, very great collection, we would need to sell a picture, and I don’t honestly think that there is a picture that we particularly want to sell.

Sir Alfred Beit: No, that’s true, we’ve done all that you see.

Lady Beit: We’ve done all that.

Sir Alfred Beit: It’s very nice when you’ve got something you want to sell which is going to fetch a decent amount of money, you can buy something of the equivalent with the proceeds, but …we’ve done the weeding out, and frankly there’s little or nothing that I would like to get rid of now however much I might like to buy something else.

Lady Beit: I think that’s a very important point: we really don’t want to sell anything. After all, the whole object of what we’ve done here at Russborough, opening to the public and that kind of thing and why we’ve done it is to try and keep the collection as it is in the house.