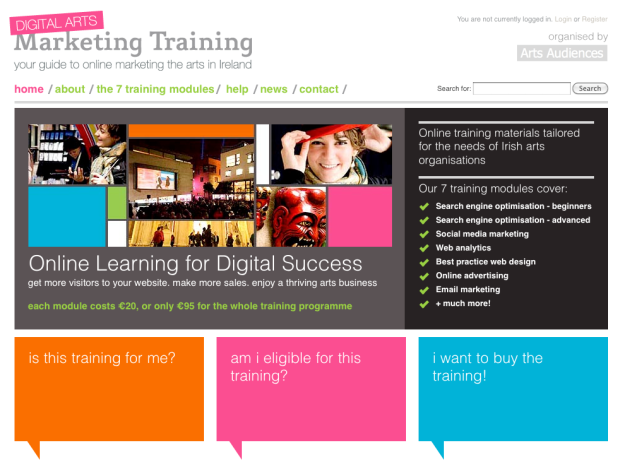 The good folks at Arts Audiences were kind enough to give me a preview of their new online training programme (fully launched on Tuesday!) on digital arts marketing — the skinny is that this is a cost-effective (€20 for each module or €95 for all seven) and focused way for folks to up-skill in the following areas:

Funded by the Arts Council, Temple Bar Cultural Trust and the Department of Arts, Heritage and the Gaeltacht, it’s delivered by Susan Hallam and includes case studies of the ABSOLUT Fringe Festival, the Abbey, Balor Arts Centre in Donegal, Éigse Carlow Arts Festival, and the National Concert Hall. This looks to be a great resource for enhancing your online chops; other offerings from Arts Audiences have been jumped on like office candy, so let me know if you’re liking the look of these too…

Business to Arts also held a reception Tuesday night to mark the many new initiatives they’ve recently launched — Fundit (which just had its first project reach 100% funding), New Stream Project, Arts Fund for Ireland, etc. Culture Minister Deenihan was also on hand to say a few words — my notes from his short speech read ‘cultural broker’ ‘private philanthropy’ and ‘Kerry’ (the first two refer to the aspects of his pre-election Arts Plan that have been identified as objectives for the new department; the third was the term of highest spoken frequency). The BtoA core team of Stuart, Rowena and Andrew have done amazing work over the past few years and deserve all the kudos coming their way! I was delighted as well to see Mason Hayes & Curran’s lovely collection of artworks in their offices — particularly the Corban Walker piece in the atrium (he’s the next featured artist for the Irish Pavilion at Venice) and the Rowena Dring textile work I spotted on the first floor (she had a fab exhibition at the Rubicon a few years ago I wrote about).

The third big honking thing to launch on Tuesday was Dublin City Council’s Public Art Programme, detailing plans and themes for the upcoming round of public art projects. The four strands of the programme are (1) Dublin, (2) Interaction with the City, (3) Connecting with the Public, and (4) City Contexts; a call for proposals for Strand 2 is open until 27 June. The launch document also includes a striking series of pinhole photographs taken by young Dubliners, the result of a commission from the Gallery of Photography.

The Art Fund in the UK (the largest public endowment for the arts in the UK, established in 1903) has announced it’s increasing its funding available to museums to purchase new works of art by 50% — that’s in addition to its launch of the ‘National Art Pass‘, which for an annual subscription of £35 (and less for students etc) will offer free admission and discounts to exhibitions in museums across the UK (*wipes drool from keyboard*).

Dublin Contemporary is hiring for five temporary positions — deadline is 22 April (has also been added to the jobs page).

Don’t forget about the Visual Arts Workers’ Forum (‘Work It’) at Project next Weds (20 April) — the schedule & session descriptions have now been posted.

There’s a conference on contemporary cultural policy (with a specific German focus) coming up on 6-7 May: ‘Contemporary German-Irish cultural relations in a European Perspective: Exploring issues in cultural policy and practice‘. The conference is co-organized by the Goethe Institute Dublin and The Centre for Irish-German Studies at the University of Limerick; attendance is free!

NCAD and UCD have entered into an ‘academic alliance‘ (yeah, I wasn’t sure at first what that meant either)– we’ve been having a series of discussions with folks from both institutions about new research strands, collaborative projects, new cross-listed modules, and the possibility of joint MA programmes — the six themes are (1) the studio: from process to product; (2) the expanded academy – college and communities; (3) text and image; (4) the city: urban cultures; (5) culture and institutions; (6) arts and healthcare. I’m particularly keen on numero (5) — lots of enthusiasm and great ideas at our last meeting — on to the achievable objectives, what ho!

I’m currently working on the idea of developing a new upper-BA course on photography (history, development & theory) for UCD in 2012-3; I’ve been in lots of interesting conversations in the past week over directions it could take & possible collaborators/opportunities for cross-listing. Hugh Campbell (prof of architecture over here at the Big B) has been running an MA level module in architecture, space and photography — I’ve been inspired by their class blog ‘Space Framed’ and would be interested to see any other examples of Irish 3rd level class blogs that make good use of the online medium (Blackboard, I’m looking at you.)

As a coda… thanks also to everyone over the past few weeks I’ve run into who have had nice things to say about the blog! It’s nice (and a little creepy) to think how many of y’all read this every week… hope you find it useful, and I always welcome notices, job announcements, press releases, constructive critique, and chocolate.