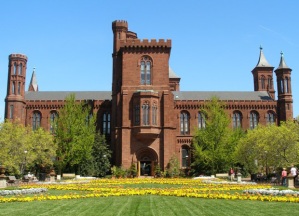 Big cuts have been announced to the salaries of the top-paid employees at the Smithsonian, in an effort to curb exponential growth in executives’ salary:

According to figures released recently after a request by The Associated Press, the chief financial officer for the Smithsonian Institution could have the biggest reduction. If the cuts planned for five years from now were made today, CFO Alice Maroni could lose as much as $120,000, or 41 percent of her base salary of $293,280. Others could have reductions ranging from $6,000 to more than $80,000 a year.

Nonprofit watchdogs and members of Congress have been questioning salaries at the Smithsonian since former Secretary Lawrence Small’s compensation grew to nearly $916,000 for 2007. Small resigned in March 2007 when it was revealed that he was also charging the Smithsonian for housekeeping and repairs to his home swimming pool, among other expenses.

Critics aren’t sure the Smithsonian has done enough. They question why [new Smithsonian secretary] Clough is paid more than the U.S. president, who earns $400,000 a year.

“One has to ask, what’s the logic of paying Clough $500,000 and then paying the others so much less?” said Pablo Eisenberg, a senior fellow at Georgetown University’s Public Policy Institute who studies nonprofit leadership. “I don’t think that makes for very good morale among staff.”

(read the rest of the article)

Yikes. Somehow I think this is one financial model Irish arts institutions won’t be following…

Thanks to Kevin O’Dwyer for passing this news article along.