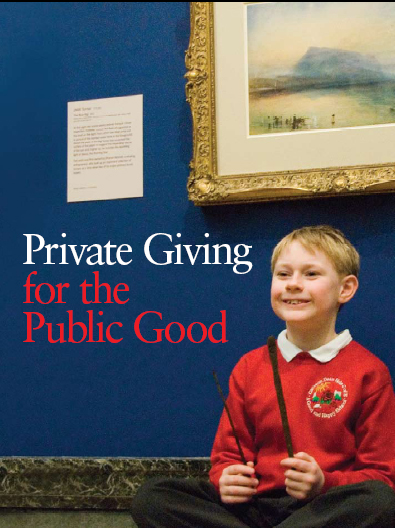 This week saw the launch of a campaign in the UK to bolster levels of private philanthropy and reform the current philanthropic tax code: ‘Private Giving for the Public Good‘. Sponsored by The National Museum Directors’ Conference, The Museums, Libraries and Archives Council, and Arts Council England, the launch of the campaign was lauded by Nick Serota in The Guardian, who emphasised the importance of ‘encouraging a new generation of philanthropists across the country. I believe that this is an important step towards creating a new culture of giving which has the possibility to transform our cultural landscape and create a roster of 21st-century names to match the great benefactors of the past.’

According to its published report, the objectives of the campaign are:

Chief amongst the report’s observations is the fact that Britons have experienced a 25% average growth in income since 1992, and yet charitable giving has actually decreased by 25% (as a percentage of GDP) in that same time period. Additionally the current tax situation in the UK offers breaks for donations of artworks only posthumously, which has prompted calls for reform to the code to encourage lifetime giving:

“Yes, there are incentives for people to give after their death – but when you’re dead you can’t take the credit and you can’t come to the party,” said Roy Clare, chief executive of the Museums, Libraries, and Archives Council. (from The Guardian 26/04/08)

Creating a culture of giving and establishing a new paradigm of philanthropy: such goals will seem familiar to those involved in development on our shores, as do the observations about an unfavourable tax code and statistics about the rate of giving compared to the growth of wealth. As the Report on the Irish Fundraising Landscape (2007, Centre for Nonprofit Management, Trinity College Dublin) points out, data from the 2000 Household Budget Survey (CSO) shows that between 1994-2000 donations have increased only 18% while average weekly disposable household income has increased by 50%. In Ireland the introduction of the Charities Bill (2007) has also sought to add rigour to the non-profit sector, but falls short of suggesting tax amendments (and is still at the committee stage). These recent efforts build on the work of the Ireland Funds and their various reports and conferences over the past few years which have emphasised the importance of cultivating a philanthropic community in Ireland.

This is set to continue as an issue of massive importance to the arts in Ireland– although as yet there is no coordinated voice on this issue from the arts community– and it’s one which we’ll be seeking to highlight at this summer’s Arts Management conference in July here at UCD (do please plan to join us and add your voice and views!) It’s an issue I’m particularly passionate about, having seen the massive benefits to the arts that can be brought by individuals with the combined will and resources to effect change. The fact that this campaign in the UK has been spearheaded by the museum & arts sector should act as a beacon to us: it’s time for we in the Irish arts community to voice our support for a similar initiative in Ireland, and encourage a new generation of giving that will have a profound effect on our cultural life.

2 thoughts on “Creating a culture of giving”